Racist or Clueless: You Be The Judge

Our daughter attends a neighborhood school. While the school is not the best (highest ranked school) it is also not the worst school in our area. As a public school it has its benefits and its drawbacks.

One of the drawbacks, at least in my opinion is the amount / level of parent notification. I feel like it borders on systemic racism, but that could be my liberal guilt talking.

Let’s play a game of “You tell me if this sounds messed up!”

As a work from home parent, that was fine. I was not only available to answer the phone but to attend the classroom visit. Had I a more “regular” job, my ability to do both things would have been reliant on the friendliness of my boss. How many people can just come in late on Monday with no consequences? Not a lot of notice here.

Later we were informed of a parent teacher conference appointment. Meeting times were posted outside the classroom and were  again, right in the middle of the day; 1030 am. This time we were given slightly more notice but we are still talking less than a week, a mere matter of days.

I am going to say that it is a fair assumption that there was a lot of scrambling on the parts of the parents to be able to make these appointments… and that those who didn’t have the luxury of being able to take time off of work might be missing out on getting important feedback on how their child is doing in school. Not going to say that those kids might be more in need of said conferences, but I will say that IF a kid is struggling for ANY reason, making it SUPER hard for the parent to find out about that or get feedback is certainly not going to help anyone.

Today we had another encounter with the school that left me scratching my head.

The kids had their spring pictures taken a few weeks back. Today they were sent home with a packet of prints and an order sheet. 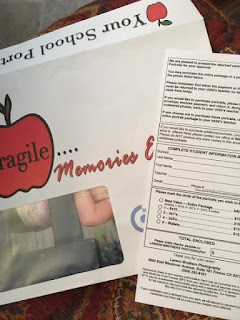 To clarify: We have been given the pictures and an envelope telling us to attach payment for the ones we want to keep and to return the rest within a week from the date of receiving.

First off this is a terrible / brilliant business model. Do you have any idea how much crap ends up in the backpack? Do you know how often things gets overlooked? We are going to be billed for something we didn’t ask for, that may or may not actually make it home? We will revisit this in a sec.

The instructions are only in English. This is of note since EVERY SONGLE OTHER FLIER or paperwork of ANY format from the school has been printed in both English and Spanish.  But sure, way to not easily communicate with a bunch of the population.  Way to set us up for success!

Lastly: they are asking us to return the payments within a week. Tomorrow is the last day before the kids have more than a week off for spring break. Like, for reals. Tomorrow is school. Then all of the next week and the following Monday they are off. Meaning you have to decide how much you are going to spend TONIGHT.  This makes point 1 and 2 even worse. It’s like they are setting the kids up to fail. 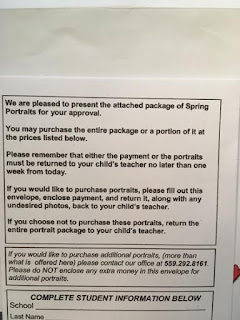 I called the school.

First I clarified the schedule. (Maybe I jumped the gun, maybe they are aware of the ridiculousness of the time constraint and will offer more time).  Is it true that the packets / payments are due within a week? Yes. Even though next week is spring break? Yes. So… does that mean that we pretty much only have tonight? Yes.

Then I asked if the instructions only came in English. (Maybe I jumped the gun, maybe they just profiled my kid as an English speaker). Yes. Apparently the photo company only provides English instruction. Do you include instructions written in Spanish? No. Why not? Well, the parents know the English. Then why has every other piece of paper come in both?

She asked my name.

My turn to say no.

How about this question: is there any negative repercussion if I keep the photos and don’t pay?

She seemed confused. You can just put the money in the envelope.

Yeah, I get that… but what if I don’t. What if I don’t do it in the time limit or do it at all. What if I don’t read English and I don’t know I am supposed to do anything? I mean, paid for pictures earlier in the year, they sent home a proof (one lone photo with a watermark) and then asked me order. This time around you just handed me ALL the photos. So, what if I don’t pay or give them back?

We are counting on the parents to be honest.

Right, ok… but will anything bad happen to my kid if I don’t?

I made a noise that was both unflattering and hard to type.

Again she asked me who I was.

Again I declined to answer.

Then she started talking to someone else in the room about a printer. The conversation was pretty much over.

Am I alone in that this all seems pretty crappy? 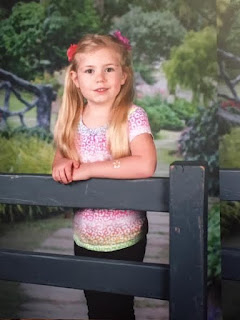