The titan of African literature, Chinua Achebe, has died at the age of 82. We know him as the writer of Things Fall Apart (although that was only his first book).
I read Things Fall Apart as part of my 501 Project / Goal.
But then I didn't write about it. I have no idea why. I remember reading it, I remember typing about it... I even remember a few turns of phrase that I used... but I can't seem to find a blog post about it anywhere... so let's blame internet gnomes and move on.
I really liked Things Fall Apart. It was a relatively quick read but it packed a wallop of an emotional punch. Published in the late 50s (and thus at the end of British colonial expansion) it tells the story of British colonial expansion in Nigeria through the eyes of not the colonist, but the African people who get colonized, namely a tribal leader named Okonkwo. 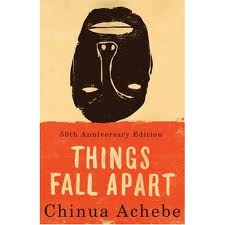 Not only is it a gripping foray into a part of history and a population that is often overlooked in both literature and politcs, but the story itself is well told and full of fascinating characters.
Yes the book is significant because it humanizes the plight of the African people, but it is more than that... this glimps into the lives of the tribal people is at once a history lesson and a reminder that there are such things as universal human emotions: love, fear, greed, hope.
I really enjoyed this book and highly recommend it. Read it for its cultural significance, read it for its well crafted pose, read it for the history lesson... but read it.
Thus sayeth Kaylia Metcalfe on Friday, March 22, 2013
Email ThisBlogThis!Share to TwitterShare to FacebookShare to Pinterest
Labels: 501, Review: Fiction