Monday's Sundays In My City: The Missed Parade

Back in the long long ago when I was an active part of the Blog-o-sphere, I used to visit a blogger named Unknown Mami. She was awesome.

Right around the time I stopped posting so much I noticed that she did a weekly post called "Sundays In My City and she invited us other bloggers to join her.

I never got around to taking part.. so imagine my joy when I discovered this week that Unknown Mami is still blogging and still doing the Sundays In My City thing!

I decided to take part!

Yesterday was Sunday... and my city is Fresno.

Lucky me, there was a Mardi Gras parade ion the Tower district yesterday afternoon! Even better? I was in the Tower in the afternoon.... BUT sadly I was there because I was going to a staff meeting at the Fresno LGBT Community Center.... a meeting that started at the same time as the parade.

So, I took a few photos anyway... photos of folks getting ready for the parade and then scampered off to my meeting.


Also, never too early to stake out your spot. This was taken a full two hours before the parade was due to start. A very serious man in beads. 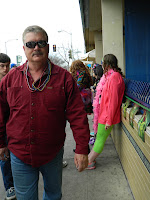 My favorite little grouping... a mother and her two children (all well past middle age) enjoying the festivities. 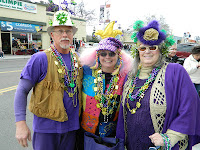 Although I did get to enjoy this: 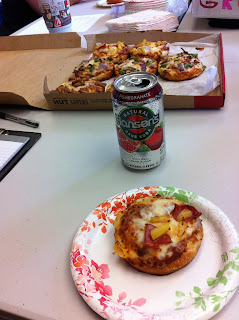 Personal Mini Pizzas for the win!!!!

Asking questions are really pleasant thing if you are not understanding
something totally, except this post offers fastidious understanding yet.
Have a look at my web site :: california health insurance quotes

Hey that pizza looks about as much fun as a parade.