I watched a few Facebook feeds explode the other day, and I kept thinking "Is this really happening .. in 2013?"

The subject was feminism.

These are interesting questions and judging by the insane number of comments on the threads I was following, they are way more complex than can be distilled down for a quick and easy sound bite.

I would wager that the answers would vary from feminist to feminist as well.

One thing though that kept getting brought up was the idea that the reason feminism got started in the first place has passed... we as a society have moved on and so we don't really need feminism or feminists anymore. 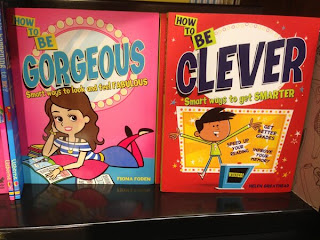 Because those sorts of gender roles are bad and they do damage.

My name is Kaylia, I am a feminist.
My male life partner is a feminist.
Neither of us are raging radical man haters or believers that women are superior.

What we are are people who think the system is unbalanced and flawed and that people need to draw attention to that fact whenever possible in order to make long reaching and impactful changes.

Let me also say that I am currently a stay-at-home mom and I don't see that as being out of sync with feminism.

But that's just me. If you want to know what other feminists think, you need to ask them.

(Full story of the books here)

I think anyone can be a feminist. I'm a male that self identifies as a feminist.

That picture says it all