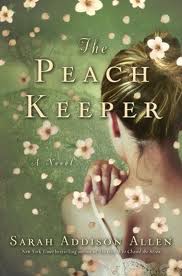 A Chick-Lit with enough heart and mystery to overcome its almost cavity inducing sweetness and light.

The Peach Keeper is the story of women... old women, young women, women from a forgotten time, women of today... women who hate each other and women who would go to the ends of the Earth to protect each other. In short, this book is about the bonds that women can form when they decide to stop competing with one another and work together.

What worked:
- The perspective change between the two leading ladies. While the author's voice didn't change, she never left you in doubt of who's part of the adventure you were seeing.

- The build up of the mystery and eventual conclusion.

- The supporting cast of characters, most notably the character of Rachel who really deserved her own book.

What didn't work... at least for me.
- The Rom/Com pairing off of couples. As soon as our cast of characters had all been introduced, two men and two women, the thought of a double date and living happily ever after was not just obvious, it was a forgone conclusion that sapped a bit of the tension from the story.

- The injection of the supernatural. Yeah, it's a pet peeve, but supernatural stuff always takes me a bit out of the story especially when it is introduced rather late in the game. It simply wasn't needed to tell the story.

- The "is he or isn't he" in regards to the sexual orientation of a character. For goodness sake people, just ask.  (But wait, you might be saying... isn't it rude to ask if someone is gay? No. Asking because you are curious is rude. But if you want to sleep with / fall in love with the person, then it is not only not at all rude, it is sort of a necessary step in determining comparability.  And he was part of the little happy foursome mentioned above... so the only person who didn't know he was into the woman was the woman herself, which was just annoying.

*Ok... another pet peeve... she has a laundry list of reasons she thinks he is gay but never EVER considers the possibility that he is bi. So.. yeah.. she saw him kissing another boy back in high school. I'm sorry to burst your bubble but high school sexual explorations does not equal sexual orientation... and even if he was madly in love with the boy in high school that doesn't mean that he couldn't also be madly in love with her... because, again, he might be bi. A mystery easily solved by asking.

But besides all that, the book was a quick read and I enjoyed the fact that though the two main women characters where set to be rivals, at least in the beginning  the author managed to make them both fully rounded out and sympathetic.  She didn't cut corners and make the rich perfect girl all evil or the more plain Jane character the heroine. I appreciated that.

So.. worth reading for sure... in fact if you need a book for the beach or the plane, consider this one a perfect fit.  Yes it is chick-lit (with all the pros and cons that entails) but it is full of heart, has a good message, and was well written.