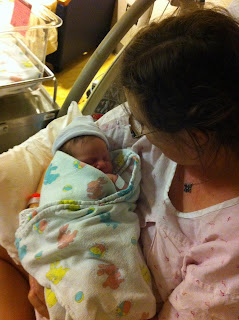 When we got to the hospital, close to midnight, I was ecstatic to learn that I had dilated to 7 cm... So... a whole 5 from the last visit! No sending me home this time! It was time for a room!

We tried to get settled, Grandma, Ashley, Daddy, Amber and I, but it was hard because the contractions were so much more intense and painful.

I have to admit here that my dignity had gone out the window. I was naked, I was standing tall on the bed, I think I might have moaned to the point of an almost primal howl.

As I write this several days later, I can remember the emotional feeling of the pain, the thought that my body was betraying me, the feeling like my hips were being sloooooowly dislocated from the inside out, the almost blinding waves that just kept coming... but it is hard to remember all the little details of the next several hours.  I remember the squat bar, I remember getting out of bed to stand and lean, I remember trying to breath and count. For now at least, I remember the pain.

Around 5 am I got checked out again and had only progressed another cm.

This is when I started to fatigue in a major way.

It had been 37 hours of labor and you weren't progressing, I was getting so tired that I would fall asleep in between contractions, little 45 seconds of sleep that would be shattered when my body would plunge me back into mind numbing pain over and over and over again.

Eventually though, and after some very clear conversations with the doctor who was trying his best to keep me out of the operating room (his stance was that my water still hadn't broken, I needed that and I need Pit to help keep these contractions moving UP and harder to actually help with the dilation.... but that as we went later and later my chancres for having to have a c-section were just getting bigger), I decided to accept the epidural.

After 37 hours of labor, I felt I wasn't cheating, I wasn't weak, and I needed to do what was best for both of us. at 6:30 they administered the epidural.

Holding still during contractions while getting the epidural was insanely hard to do. But I did it, with Daddy's help.

Then they broke my water, installed a cath, and started me on Pit.

And miracles of miracles, I was ok with it. I was better than ok with it. I was so relieved to be out of so much pain (still feeling those contractions, more like heavy pressure now, like bad cramps) and yes I could still move and feel my legs.

We all took a nap.

Three hours later, I was better rested, still feeling the contractions, and ready for what would happen next.... what happened next was that even with the 'pit, I was only at 8 cm... so more pit was needed.

Looking at the read outs of the contractions, I was never more happy that I had changed my mind and allowed the epidural. I don't think I could have endured so many more hours of that level of pain, especially since we just weren't progressing.

That was pretty much the rest of the day. I labored, heavy pressure, working on my breathing, no more resting, highly uncomfy but away from the horrific pain.

Why oh why weren't we progressing?

It turns out you were a Sunny Side Up baby, you were turned slightly wrong.  (Meaning that my severe pain had a reason and that there wouldn't have been any way to help it).  WE got me into some weird positions and eventually got you to turn.

Ok, so... you are in the correct position, I am still laboring... but we still aren't progressing as fast as we should, although we are finally at a 10.

Dr B talked to us about vacuum extraction.  Again, he wanted to avoid a c-section buthe was getting concerned that you might be just too big for me to push out...

I was terrified of the vacuum extractor. I thought it would be this horrible conrtraptin, I worried that it would damage your head, I felt like I was failing you already by not being strong enough to push you out.

Another long conversation with the dr, who answered all my questions and even showed me the tools, explained the risk and the benefits and told me again that he was trying to save me from the operating room.

Ok, I said, eventually, for now I want to chance to push.

They upped my Pit again and the pushing started.

A whole new level of pain / pressure and breathing.

Grandma and Amber held my legs while Daddy talked me through each contraction push.  I could feel the contractions in my uterus so I knew when it was time... and boy was it time a lot.

I pushed and I pushed and my ever present nausea got worse and worse until I ended up throwing up.

And that's when I cried a litle. I was so frustrated and sick and in pain and scared that I wan't going to be able to do it.

The Dr came back. It's time he said. No, I said, another half an hour of pushing.

A half an hour later, on the dot mind you, he was back. It's time he said. Ok.

I pushed, he prepped the vacume xttactor.

He only gets three tries. I know this, I can hear them counting and giving the time. I can feel you stretching me, tearing me, opeing me up.

Again we all say, and again we go. I arch, I strain, I push and I tell myself I am willing to break myself in half, I am willing to ripe wide open for you, I want you to be safe so bad, to be out and breathing, and ok.

The time is being counted, we are running out of time... and then you are out. you are moving from inside of me and into the world.

And I am gasping, wheezing, filled with emotions that I can't even begin to name.

They take you off to the side and Daddy goes with you.  I wait. I wait... and then I hear you cry.

I get stitches because I tore (but only 2nd degree, thank goodness). I deliver the placenta I know they have turned off the epidural, they have removed the cath with it', it was huge by the way.  blood filled urine. But I don't care because finally, finally, they bring you to me and they lay you on my chest and then I am touching you, feeling your skin against mine, falling even more in love with you and with Daddy and I can't stop crying.

The rest of the night was a blur... but here are moments:

Daddy cut your cord.
He handed the scissors to someone and no cone could find them for a bit.
You were 9 pounds 3 oz and 21 and 3/4 inches long.
You had perfect brown hair.
You had daddy's cleft chin.
I thought I wouldn't want to ever let you go but watching Daddy hold you made me so happy.
They moved us to a new room and I changed into a new gown... I mistakenly thought my naked time was over.
I got trained on my peri care, a very elaborate process.
I stood up for the first time in what felt like forever.
I had to remember how to pee.
There was so much blood.
We swaddled you in the hospital blankets.
There was music.
We slept.

Congrats on your beautiful girl and your hard work! Happy Babymoon mamma!