Whew, now that the 500th post is behind me, I can get back to writing!

I want to tell you all about NOH8.

This photographic project started in late 2008 after Prop 8 passed (which as you probably know took away the right to marry from same-sex couples). First with friends, then with celebrities, and finally as an international movement, photographer Adam has taken thousands of photos of people with the trademark NOH8 tattoo and duct tape.

I love the idea of this silent protest. I love the idea of placing yourself into a position of oppression to draw attention to the fact that you are oppressed... and then the freedom to rip away the tape and shout to the world that you do have a voice, that your voice is mighty and that you matter.

I won't have my official one for about 8 weeks (I might have already given birth by then, gulp) and I will show it off here once it comes in. In the meantime, here is my NOH8 face via my phone: 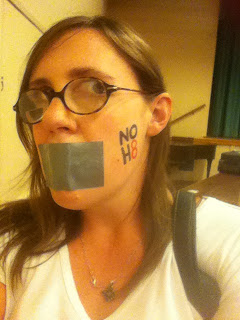 I just want to say thank you to NOH8 and to all the great sponsors here in Fresno that helped make this happen! (Check out the full recap here).

Oh! And I got quoted in one of the news stories!