And not because I am not a believer.

Not because I'm bi.

Not because I'm living in sin and having a baby out of wedlock.

I'm going to hell because when I saw this: 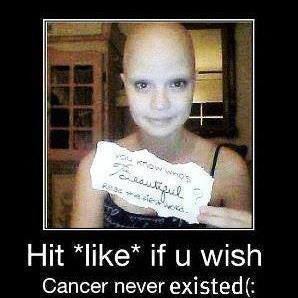 I thought "How sad, someone is punishing that poor alien with leet speak and bad grammar!"

Really though? Isn't this the same lame-brain socially sympathy driven crazy that led people to think that changing their online avatar to a cartoon character would do anything, anything, about child abuse?

I mean, I know that this country suffers from "the stupid" on a colossal scale.  But this stuff? This stuff just seems like a bad Poe version of itself.

Not to mention that it is borderline offensive to those who have suffered or died from cancer (or lost loved ones). "Gee, if only there had been this creepy ass meme around ten years ago and enough people had "liked" it, Uncle Peter might still be with us."