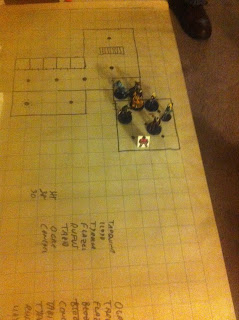 Tonight we had a bunch of people over for a DnD game.

DnD (Dungeons and Dragons) was really important to Daddy when he was growing up. It helped him leans social skills and empathy as well as imagination and problem solving techniques. All that from a game, it's true.

I am a new convert to the world of DnD, but I have a feeling it will be a pretty routine part of your growing up.
Thus sayeth Kaylia Metcalfe on Saturday, March 03, 2012
Email ThisBlogThis!Share to TwitterShare to FacebookShare to Pinterest