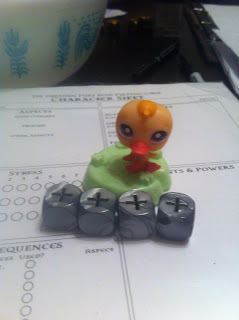 Well, actually.... "A proboscis /proʊˈbɒsɪs/ is an elongated appendage from the head of an animal, either a vertebrate or an invertebrate. In invertebrates, the term usually refers to tubular mouthparts used for feeding and sucking. In vertebrates, the term is used to describe an elongated nose or snout."
This is a toy that came with my happy meal tonight. I have named it Proboscis and it joined us at the gaming table. (Aunt Allison and Uncle Evan introduced me to a role playing game called Fate, those are the dice for Fate.)
We had a lot of fun adding this little bobble headed toy into th egame.  No idea if it will survive the next several months... but there you go.
Thus sayeth Kaylia Metcalfe on Tuesday, February 28, 2012
Email ThisBlogThis!Share to TwitterShare to FacebookShare to Pinterest