Dreamers of the Day 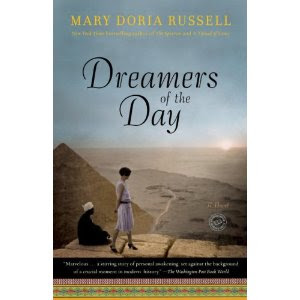 Dreamers of the Day by Mary Doria Russell

I read, loved, and was forever changed by Mary Doria Russell’s The Sparrow.(Review Here) How could I resist reading another title from her? I am so glad I did.

This book was so enjoyable that I felt almost afraid to keep reading it. I was sure something awful would happen to the character I had grown to love. (No worries, the book has a wonderfully simplistic and very fulfilling happy ending.)

Set in the early 20s for the majority of the tale, the book follows the adventures of Angus and her dog Rosie as they unknowingly take part in the Cairo Convention and interact with such historical ficures as Lawrence of Arabia and Winston Churchill. Like The sparrow, a lot of the action of the novel takes place through dialogue, political and historical dialogue that manages to be both totally believable and insanely educational all while keeping your interest and furthering the character development and storyline.

In a word, the book was amazing.

I highly recommend it for its prose, its scope, and ultimately for the story… an oft forgotten real life drama of political map making and county borders drawing that all but created the Middle East as we know it. As that part of the world continues to be a focus of unrest and turmoil, a book like this that explains some of the issues from the point of view of inception, is a must read for anyone who wishes to have an understanding of the milieu of crossed loyalties and tribal dramas… while telling a late in life coming of age story involving a protagonist you can’t help but root for.

While the post dead aspect of the story is a bit sentimental and a wee bit silly, the ideas and impact of the rest of the book more than make up for it.

I highly recommend this title for those of you who like history, strong female characters, adventure, travel, and most importantly, well written prose!

Boys on Bikes, God, and A Rainbow Connection 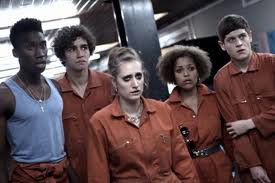 This show is new to American audiences, but a fan favorite in the UK. This gritty and dark take on the superhero genre is well worth watching. An ensemble cast tells the story of five juvenile (early 20s) London delinquents who get zapped by mysterious lightning and develop powers. Although there are times when the accents (British etc) are a bit hard to understand, the cast is well formed and the storylines are surprisingly profound and compelling. I especially like that the rag tag group is not a family, a group of friends, or a team really... in fact, they don't particularly like one another.

Because of its across the pond roots, the show is full of violence, sex, nudity, and language. Thankfully, so far at least, it has managed to keep itself out of the realm of camp and corny and in the realm of interesting and slightly provocative. Also, a nice change of pace… we have teens/early 20s characters without any of the overly dramatic sappy teen/eary 20s angst. These characters are well rounded and fascinating.


The writers use the sci fi aspects to enhance the story arcs instead of relying on them to provide the story arcs which is understandably refreshing. Mixing dark comedy and believable dialogue with super powers that are not as super as one would hope and real life struggles of selfhood coming of age drama, this show is clearly something worth watching. 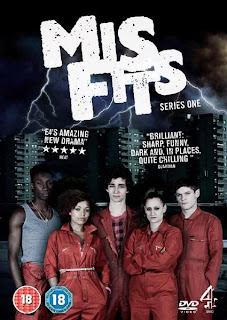 I have a new piece up over at GarFresno.com in which I talk about the label of bisexuality and pansexuality. Here is the teaser....

One of the things labels do is attach or confirm stigma or stenotypes, which is why we are so careful when allowing ourselves to be labeled. I resisted the label of “bi” for years because I didn’t see myself as a fence sitter, a slut, or a shifty spy. I saw myself as able to fall in love (and sometimes lust) with a person despite their gender, not because of it.  I was, and still am, attracted to people based on their personalities, their senses of humor, their ability to converse intelligently, etc. What does or doesn’t dangle between their legs is beside the point. When pressed, I usually would say that I was into people, not gender.
I became more comfortable being bi partly from exposure to more understanding and less judgmental people, and partly from a desire to change the stereotype.


And then I was introduced to the concept of Pansexual.  “What does that mean?” I asked innocently enough.
“It means that I am attracted to people based on their personalities and not limited by genitals. I‘m gender blind.”
“In my day, we called that bisexual.”
“No, bisexuality is limited. You only love two genders. I have the capacity to love them all.”
Let me stop right here and add that due to the fact that I am typing this, you might not be getting the smugness and slight condescending tone of this particular pansexual person.
REad the whole thing and weigh in here.
Thus sayeth Kaylia Metcalfe on Tuesday, July 19, 2011
Email ThisBlogThis!Share to TwitterShare to FacebookShare to Pinterest
Labels: Gay Fresno, Politics, Self
0 comments