In a move that shocked no one, Sarah Palin (who really needs no introduction) has joined Fox News (aka Faux News) as a regular commentator.

I’m sure her analysis will be in depth and biased free.

Worth noting is the absurd comment she made calling Fox News “a place that so values air and balanced news.” 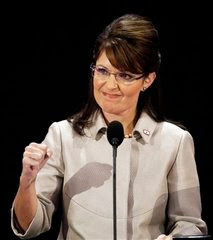 Proof that her critical thinking skills are in a dire need of a tune up.

Really.... no one really thinks Fox is biased and fair anymore right?

Also, “"Governor Palin has captivated everyone on both sides of the political spectrum and we are excited to add her dynamic voice to the FOX News lineup," said Bill Shine, executive vice president of programming, who apparently didn’t get the memo that she isn’t the Governor of anything anymore.

As a marketing tactic this makes perfect sense for Fox News. Palin is the go-to girl for the right wing religious folks who don’t really want to think. I am sure her followers are ecstatic and will tune into Fox to see her. Of course, most if not all of her supporters were already watching Fox.

And for the rest of us… her being there is yet another reason to avoid the channel like the plague.
Thus sayeth Kaylia Metcalfe on Monday, January 11, 2010
Email ThisBlogThis!Share to TwitterShare to FacebookShare to Pinterest
Labels: Politics

Fox News is the perfect place for her. She won't have to know that Africa is a continent and not a country, or know that there is both a North and South Korea. That's because none of their viewers know those things either.