A book review for 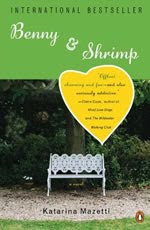 Once upon a time….

… and they all lived happily ever after.

Fairy tales are nice… sometimes. Sometimes though as readers we crave something a bit more honest, a bit more rough around the edges, a bit more Romance = washing he dishes and giving your significant other a nice foot massage.

The story is a classic Boy meets Girl… but that is where the cliché ends. This boy (Benny) and girl (the affectionately nicknamed Shrimp) meet at a graveside. And no, it isn’t morbid… it is sweet and somehow fitting. After a few causal glances at each other, they begin what amounts to two fish out of water stories and some endearing romantic comedy adventures.

But the book, and really the story, keep from being just.another run of the mill romance with the addition of a few key things. First, the narrative device of parallel structure is handled masterfully with the narration switching back and forth between our two main characters. It is worth noting that this tool is used to perfection… the reader never feels that they are getting more of one person’s side of the story and each of the very distinct voices is allowed to be showcased.

Another little tid bit is the fact that the book was originally written in Sweden. Surprisingly enough, this wasn’t as much of an issue as it was an occasional “oh yea, right… Sweden.” I loved the fact that the story itself was so well told that it could have taken place in the Midwest of America, England, or half a dozen other places and it still would have resonated.

Lastly, and I will be vague in an effort to not spoil anything for you, the problems of the love birds are both hauntingly realistic and classically endearing…. There doesn’t seem to be an easy clear cut answer…Because we feel for both of them, it is hard to find a solution. We just aren’t sure what is going to happen next. Much like life, that is what keeps us interested to the very end.

(Oh… and I guess I should mention that it is tiny and simply a snap to read.)