Every now and then something comes along that I almost miss because I think I already know what it is.

Today it was Glee. 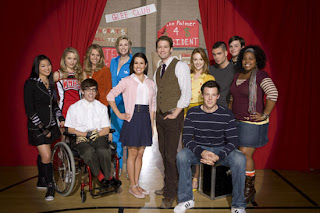 I had seen the promos and I had rolled my eyes… a musical comedy? Set in a high school? Gee… where have I heard of that before? Now, unlike many many people here in the States, I have avoided High School Musical in all its conceptions like the plague (except for the South Park parody) and I had no misgivings regarding that fact.

Glee looked like more of the same. Also, most of the “teen angst” shows on television do nothing to stimulate my interest. Gossip Girl? The Hills? Puh-leeeeze, take a pill and call me when you graduate and are in a show that matters.

But boredom can be a catalyst for greatness and so today I watched the pilot episode of Glee via Hulu.com.

Yeah the story is a bit contrived, yeah there is a slight (ok more than slight) after school special vibe… but the performances are really great and the cute little moments help keep the cheese factor at a tolerable level. There is also the matter of a stellar cast!

The show centers around a group of misfits who somehow come together in the high school’s glee club. It is the quintessential whole is more than the sum of its parts with a dash of high school cliques are evil and not everyone fits into a little box. Decent enough messages.

Will it last, I have no idea, I loved Firefly and look where that got me, but until it takes its final bow, I will be an avid supporter and gleeful spectator.
Thus sayeth Kaylia Metcalfe on Thursday, May 21, 2009
Email ThisBlogThis!Share to TwitterShare to FacebookShare to Pinterest
Labels: Review: TV

OOOOHHHH, I love firefly. I will have to check out Glee if it ever hits our shores, or remember to watch online. Thanks for the heads up.

So glad you love Glee, too! I watched it online the other night and have been badgering all my friends to hop on the bandwagon now. I've managed to never see a single High School Musical, so I think that helps!