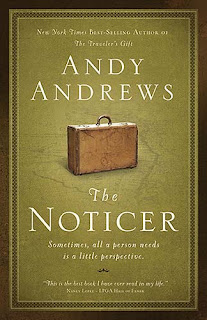 Book Review for The Noticer

First of all, I would like to say that had I been consulted, I would have named this book “Perspective” or “Jones” or well almost anything besides “The Noticer.”

This book bills itself as ‘a moving story of common wisdom” and while the common wisdom part is correct, there wasn’t that much of a story involved.

Let me break it down. There is a guardian angel named Jones (or Garcia or Chen depending on what nationality you happen to be) who dispenses much needed wisdom and perspective to the inhabitants of a beach town. He is loved by young and old alike and has the ability to help people look at their problems or situations from a different point of view… or perspective. “Perspective” is Jones’ favorite word.

The framing device of the guru helping the townspeople deal with issues like divorce, communication, hopelessness, acceptance of eventual death, etc works as a framing device should, it keeps things contained and centered and allows the portrait to be the object of focus.

Which is of course the “common wisdom” that is doled out by Jones.

Now, some of the common wisdom is actually worth taking nte of. I personally found the illustration of how different people respond to different signifies of affection and love to be interesting. The idea is that if you are the sort of person who shows your affection and love verbally and your partner needs more tangible physical reminders, you are liable to both not be getting what you want. By understanding what your partner, friend, child needs you can work to provide it and vice versa.

I read that bit and nodded along, “Right, that makes sense” Not all of Jones’ wisdom is as cut and dried. Occasionally his wisdom is a bit cheesy The lesson given to a gaggle of earnest teens of “Every Date is a Potential Mate… so date wisely’ is a prime example. Not that the idea behind it isn’t true… but the delivery of an old man (guardian angel or no) giving teenagers dating advice and them taking it was a bit hard to fathom.

Eventually the town realized that they have been blessed with the advice and attention of a truly remarkable and supernatural being and there is a sense of camaraderie and cohesiveness that is enviable if not really attainable for people who don’t live in a teeny tiny beach town.

All in all, I would say reading this book didn’t change my life… or really my perspective on much but it did give me food for later thought. I appreciated the morality that was being taught and found it refreshing that the book wasn’t a sermon even though it could very easily hae become one.

As far as story goes… well the framing device of the town was tepid at its best and overly cliché at its worst. The common wisdom was, however, sadly not common enough.

If you feel the need for some good old fashioned never out of fashion inspiration that even though it suffers through a sometimes painful framing device and enough small town “charm” to make you go running for the nearest skyscraper still manages to convey the overall feeling of hope and yes, dare I say it, perspective… then I recommend this book.

And if you are interested, go ahead and buy it from here!