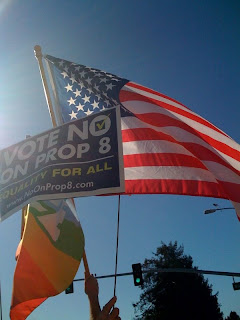 News for LGBT rights… New York has a bill making its way that would allow same sex marriage.

Things to note: The bill was introduced in 2007 where it passed the state Assembly but did not pass the senate.
The senate at that time was Republican controlled.
Now-a-days the senate has a majority of Democrats.

Here’s a fond and optimistic hope for NY to follow suit with Iowa and the rest of the states currently making CA look even sillier by comparison.
Thus sayeth Kaylia Metcalfe on Thursday, April 16, 2009
Email ThisBlogThis!Share to TwitterShare to FacebookShare to Pinterest
Labels: Politics

Fingers crossed that this pass. I'm liking this trend.

Yes, Kay, I'm proud of my governor and hope my state will pass the bill... :)