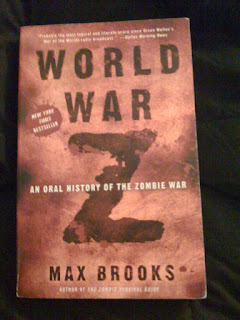 (Today’s review will take on a different form. Not content to merely give you a few paragraphs about whether or not I liked the book and why, I have decided to so something a bit more dramatic.)

Kaylia sits on the couch, legs curled up underneath her, reading. From the kitchen sounds of cooking carry though the small apartment; Matthew is cooking.

Scott flops down in the easy chair and regards the woman on the couch with apathy until he notices what she is reading.

She glances up, “Yeah, almost done.’

‘Are you enjoying it?”

She pauses, one eyebrow raised ever so slightly and seems to give the question serious thought for a moment.

Scott is mildly surprised having read the book himself a few months back and having enjoyed it immensely. “Really? I read it a while a go and I really liked it.’

She shrugs, years of being a Lit major has taught her many things, the most important one being that people can have lousy taste in books, although in this case, that wasn’t exactly the case.

“Well,” she marks her place with a well trained eye and then turns to give him 90% of her attention (10% being saved for the sounds of cooking coming from the kitchen). “I do plan on finishing it, I am glad I am reading it, and I am very interested in it, but it is a horror book and I can’t really say that I am enjoying it. If you know what I mean.”

He leans forward intrigued, ‘What do you mean?’

“Like I said, it is a horror book… (not really my thing) and it is supposed to be scary and disturbing and such… I mean it’s about zombies trying to take over the world and it is very well written… once you buy into the premise of the undead it is downright creepy how ‘realistic’ it gets.” (She uses air quotes around the word ‘realistic” and then continues.) “And I think he did a great job of instilling the plausibility of the premise… it isn’t over explained which makes it even more disturbing… the whole fear of the unknown thing is very well played… and the fact that then it translates into the fear of the known, well there are some very nice levels of reality and knowledge and fear and such, but I think what is the scariest thing about this book is the realism when it comes to the human reaction to the ‘zombie uprising’ That is what really bothers me.” (Air quotes not around “realism” but around “zombie uprising”… she makes her air quotes with both hands and gives them a whole arm movement to add to her point.

“Oh you mean, how it could actually happen/”

“No… well, sort of. I think that the background of this horrible catastrophe is silly (I mean really, zombies?) but the way people react to the zombies.. the cruelty, the insanity, the military mistakes, the random very human moments, all that is very on the nose. And a lot of that is very negative. Which is kind of depressing.”

From the kitchen, proving that he is a man who can both cook and contribute to the conversation, The Maifan-San speaks “Toward the end there is a bit more positive stuff.”

She turns toward him and hefts the book in one hand, “Oh I know, I know, I am pretty close to the end… and it wasn’t any big shocker that the human race found a way to survive… I mean the book is written as interviews with survivors and that is a pretty good narrative device if I may say… (beats the heck out of a dog doing all the talking) but still….”

Again from the kitchen comes the voice of a man who also enjoyed the book in question “I thought it was interesting how all the different countries were portrayed… that thing with North Korea? Very creepy.” He makes an exaggerated shudder noise to lend credence to his words.

“Right, and that was very well written, very powerful… no question.” She turns back to Scott, “but still horrifying and bothersome.”

Scott smiles “Right, I think that was the point. I flew through it, couldn’t put it down.”

She regards the book on her lap for a moment, her eyes troubled. In her head she can hear the sounds of the death, the backlash of the people, the cries of the children. This is a book that will stay with her. She opens it back up, a mere 25 pages from the end, “Exactly”

If you are interested in reading this book for yourself and agreeing or disagreeing with my review, feel free to use this link to buy it on Amazon!