And now, the review: 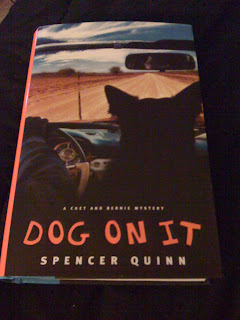 This is one of those times when the title of a book gives you not just a glimpse of what the book itself will be about but also the tone, the cleverness, and the staying power. If you think the title is clever, if you think it is cute, if you find yourself smiling at the play on words… then you will enjoy the story.

It all depends on how much shtick you can comfortably handle. Dog On It follows the detectives in the Little Detective Agency as they in turn follow the clues in a missing persons case. The two detectives are Bernie, a likable rather normal guy, and the narrator Chet his loyal canine companion.

I found the actual story of the missing girl to be mildly interesting at best and the voice of Chet to be a mixture of annoying and more annoying. There are a few problems inherent with having a dog be the narrator. The first is that his emotional range is limited and thus we never really get drawn into the human characters. We care about the resolution of the case in a vague sort of way…. But really the most dramatic moments come when Chet has been dognapped and is running for his life. And sadly that is toward the beginning of the story. By the time the climax rolls around the reader is still only mildly interested in the case and also only mildly interested in the romantic entanglement of Bernie. The lackluster emotional draw could have been ignored had the draw of the dog’s voice itself have been more interesting. As it was, we come to problem number two: the dog’s voice gets old, fast and isn’t consistent. There are problems with Chet himself… at times he seems to have an almost human knowledge base while other times we are reminded rather lamely that he in fact a dog by his confusion with idioms or short attention span. He doesn’t understand money but he totally gets the idea of sending someone to jail. He gets distracted by sounds and smells at the drop of a hat early on but later when the plot needs him to be super dog, lean, mean, and concentrating he suddenly is all business.

While I can appreciate the new voice aspect and the almost childlike way in which Chet sees the world I found his voice to be grating and frustrating.

Maybe I am more of a cat person than I realized.

That isn’t to say that the book was badly written or not worth the handful of hours that it took to get through it. Should you be in need of a low-brain-impact sort of fluffy reading material perhaps as you sit bored on an airplane or half dozing in a lounge chair at the pool, this book will surly fill that void. However, if you are looking for something that you can sink your teeth into, a book with real staying power and a voice I would recommend looking elsewhere.

Note: It has come to my attention that the shtick of Chet has become strangely pervasive. He has a Twitter account. He has a blog. No, I am not going to link to them here. If you really are that interested, knock yourself out. In my own humble opinion, I think that this is an example of Viral Marketing gone to the dogs.*

In other words… an overexposed weak idea is still a weak idea.

*(Oh come on, you knew I couldn’t make it through a whole book review of a dog book without at least one pun right?)
Thus sayeth Kaylia Metcalfe on Monday, February 23, 2009
Email ThisBlogThis!Share to TwitterShare to FacebookShare to Pinterest
Labels: Review