Ok, I promised a blog about Japan and the subway system. Here it is.

Tokyo is huge… massively amazingly, huge. And so is the Subway system. 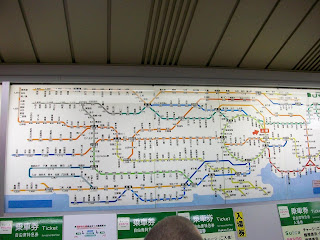 There are also subway stations that are the size of city blocks with shopping malls and thirteen stories of confusing building on top and six stories of shooshing whooshing trains underground.

Sometimes you would get off the train and just run for the nearest exit uncaring if it was in fact the South, the North, the Main, the East or any of the other seventeen different named exits… you just had to get out of the never ending hallways and corridors. In cases like this, it would take you about 5 minutes to get out… and then a good 20 minutes to half an hour to circle the building looking for something familiar.

You could also spend half an hour in the subway station looking for the right exit. 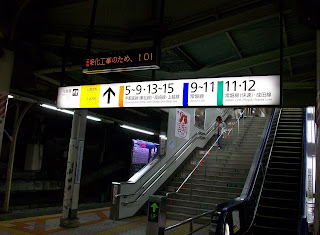 We got to the point where we were managing the system pretty decently by the end of 8 days. We still would occasionally have to stop, look around, retrace our steps, and make double and then triple sure we were about to get on the right train… but for the most part we were doing all right. 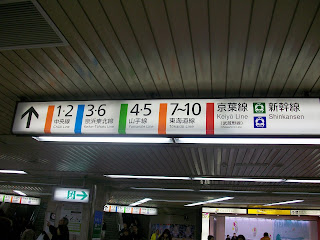 Here we are on the train feeling that strange mix of pride and exhaustion. 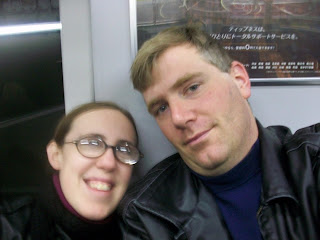 Really though, the system, for all its complexity and hugeness, was a lot like the ramped up on steroid version of BART.

Except for the people.

Now, I ride the Light Rail everyday and am not a new hand at the Silicon Valley’s public transportation system. I have been on my share of crowded busses and trains. I have been squeezed between people who hadn’t used Dial or any other form of cleaning product. I have been part of a mass of people all moving together on or off some form of transportation.

There were people, everywhere. And they all seemed to know exactly where they were going. They all walked really fast (staying to the left rather than the right like we do in the States) and they all marched with a seriousness of purpose and the blank drone like expressions of weary commuters. In other words, safety came in staying out of the way and trying not to get mowed down.

Here are a few delightful videos of the subway system in Tokyo…. (The third one is the best)

The first video is of us leaving Shinjuku Station.

Next we have us just a sec later at “our” intersection.


And lastly, proof that this is a culture that takes the idea of “maximum occupancy” to a whole new level of OMG.

Holy crap. Glad I live where I don't have to use that system every day. The map looks like a more complex version of what Boston or New York systems are like. Only the pictures show that the subways are way cleaner and better lit than here. With that many people in them, I can see why they made such an attractive target for terrorists. Talk about maximum impact. Wow.

I loved the Tokyo subways, always clean, on time and you knew exactly where the doors were going to be - so organised and efficient. It astounded me that walking from one platform to another would be greater than the distance from one station to another here! I didn't know where I was going so I kept reciting towards the end of each day 'home is near Suitengumae, if you can find that you can get home'. I want to go back there...

It would be an amazing experience, but I would have to include some time away from the crowds.