If you haven’t heard by now the California Supreme Court (in a 6:1 decision) decided to hear the lawsuits that have been filed against Prop 8.

1. Does Proposition 8 make such a far-reaching change to California's Constitution that it amounts to a constitutional revision, which requires a two- thirds vote of the Legislature to be placed on the ballot?

2. Does Prop. 8 violate the constitutional separation of powers by restricting judges' authority to protect the rights of same-sex couples?

3. If constitutional, does Prop. 8 invalidate the 18,000 same-sex marriages that took place in California between June 16, when the court's ruling legalizing gay and lesbian unions took effect, and the election?


In celebration of the Justices decision and in celebration that the time line is a few months and not a few years, a group of about 30 people gathered last night at City Hall. 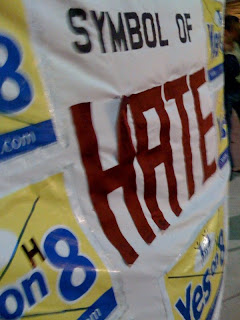 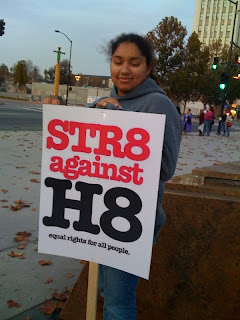 A 6-1 majority? That's pretty compelling! And encouraging. But agreeing to hear the case and agreeing with the case itself are very different matetrs.. so call me "cautiously optimistic". And while you're at it call me "straight but not narrow".

I know it's only one state, but this is a crucial decision for a lot of people nationwide. Because whichever way this ruling goes, it establishes case law... precedent for future decisions. And while it won't be directly on point in other states, it will at least give plaintiffs something to hang their hat on.

And I personally know a bunch of people who will be watching very anxiously. So thanks for the update!

Kay, as you know, I have a real problem with constitutional ammendments being made either by simple majority or by popular vote, so in addition to sharing you concerns about this particular law, I am also hoping that it will be ruled that such changes to the state constitution can not be made so lightly.