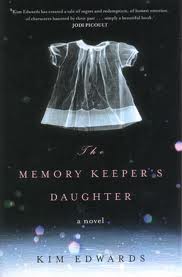 This novel surprised me.

I'm a bit fan of being manipulated by good writing to feel something  anger, sadness, regret, etc. But the key is that the second I notice I am being manipulated, I become resentful and no longer really enjoy the book...

Edwards manages to manipulate you into feeling a wealth of emotions, but her writing is so good that you don't see the strings being pulled and that makes the novel's emotional wallop an even bigger gut punch.

I'm not ashamed to say I cried when I read this... or that I immediately  looked Kim Edwards up on Amazon to see what else I could read by her.

The story, of twins separated at birth by a father hoping to spare his wife the trauma of raising a special needs child, is a powerful tale of love and family.  Working with themes of regret, hard choices, and shocking family secrets, Edwards is a master of making each and every character not only believable but sympathetic.

In the end the story, in the hands of a lesser writer, could very easily have been trite and overly melodramatic... the sort of thing that you see on Lifetime at 3 am.  However, Edwards manages to compel you to care and to keep reading even when it is almost painful to do so.  The Memory Keeper's Daughter is a raw and powerful story... but not for the faint of heart.


Apparently there was a TV movie made in 2008... but as it isn't streaming on Netflix and costs 4 bucks on Amazon, I probably won't get around to watching / reviewing it.
Thus sayeth Kaylia Metcalfe on Friday, December 28, 2012
Email ThisBlogThis!Share to TwitterShare to FacebookShare to Pinterest
Labels: Review: Fiction
0 comments

Look Me In The Eye

Look Me In The Eye by John Elder Robison 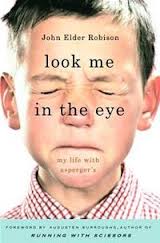 Getting divorced does not count as mighty special.

Finding a husband, raising a kid, starting a home business.... these don't count. (To me).

So... does having Asperger's Syndrome count? I was on the fence because I happen to know several people with the syndrome and most of them have had to overcome obstacles, have had to figure out the world around them differently than you or I, have gone through drama and trauma and have, somehow, survived to tell about it.

So, I was a cautious reader of this book to be honest.

The book itself is well written. It is a retelling of one man's life and his personal struggle with Asperger's. If you recognize his name it is because he is the brother of Augusten Burroughs the author of Running With Scissors.... so yeah John Elder Robison came from that same, now famously dysfunctional, family.

If you take the Asperger's part out of it, you have the life story of a man who lived an interesting life... but by no means an incredibly mighty specail life... and if you add in the Asperger's stuff you have what ammounts to one man's life with a disease that is vastly differnt depending on who has it, how early it was caught, the support system in place, and countless other factors.

Honestly, I don't know what sort of rubric to judge this book against.

It was a quick read. The flow worked for the most part. The anecdotes were clearly written and entertaining.

Writing this review a few weeks after I finished the book I suddenly started to wonder if I had actually finished it... I went back and checked. Yes. Yes, I had finished it... the ending, like the rest of it, just hadn't left that big of an impression on me.

I didn't learn anything, I didn't really feel anything except occasionally pity, ocassionaly confusion, and yes at one point a touch of disgust.

I sort of wish I hadn't bothered.

And to be fair .. again... I am one person who a)hates memoirs to begin with and b)already knows a fair bit about the thing that should draw the reader in and keep them interested. So, perhaps I should have known better than to have read / reviewed this book.

However, if you like memoirs, don't know much about Asperger's or want to know about this particular man's reality... then by all means, read it! I hope you enjoy it more than I did. 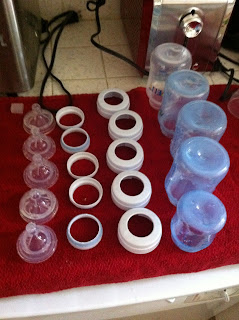 Today we kept working on reintroducing you to bottles. Apparently we had taken a bit too long of a break from them and you are a bit resistant to using them. However, we need to supplement you with formula as my milk isn't as much as it was and I (and my nipples) need to be able to take breaks from your gaping maw.

And your daddy likes feeding you.

And I want to be able to go back to work in January or at the very least take you to day care maybe one day a week at some point.

And honestly? Honestly I really don't enjoy breastfeeding. I know, a lot of women do... but I don't. I won't say I hate it, because after all it is providing you with food and health etc, but I will say I dislike it immensely.

You flail and scratch, you pop on and off, it hurts, it is draining and boring and takes forever.... and it hurts! Sometimes it seems like you hate it too!

So, to the bottles we go!

We aren't going to get rid of breast milk or breastfeeding you, we just want to be able to have more options. I have fed you via the breast for over two months now... I'm honestly not sure I can do another month, but we shall see. 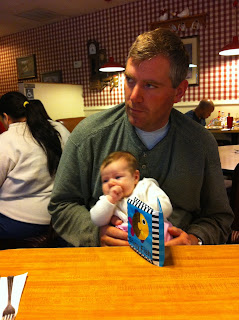 We went out to breakfast this morning to celebrate both Daddy's birthday and my birthday. You did so well at the restaurant!

We tried a new place... it was ok, but the floors were sticky so I doubt we will be back as regulars.

I'm so glad that you are here for our birthdays this year. I'm very glad we are facing our mid and late 30s with a child.

Anyway, it was a quiet day just hanging out iwth you and playing. You are doing so well with your naps and even geting pretty good at bedtime, I think you like our routine!
Thus sayeth Kaylia Metcalfe on Saturday, December 01, 2012
Email ThisBlogThis!Share to TwitterShare to FacebookShare to Pinterest
0 comments