We have spent way too much time in the car lately.
On Thursday we had around 7 hours. On Friday, 4, on Saturday around 3 and a half.
I love our car. I am thankful for our car. But I am tired of our car.
However… a few highlights from or travels….
Sharing this video with my entire family. Grandma wasn’t all that impressed, but my sisters started chanting “Salsa Cookies” a sure sign of approval.
I got to play with / learn more about Matthew’s fancy camera. I hope to get my own fancy camera someday and this is good practice. Examples of my attempts to be artistic coming soon to a facebook album near you!
We got to meet Noellia. Our newest niece. She was born on thanksgiving and is a teeny tiny 6 pounds. 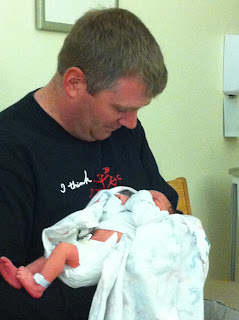 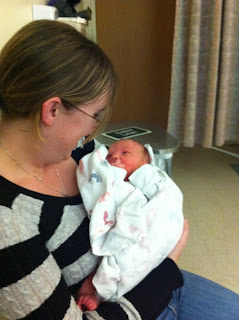 I know she is an infant and it probably means absolutly nothing, but she totally stopped crying when it was my turn to hold her... and then she fell asleep! In my arms! It was... well, it was pretty freakin' sweet that's what it was.
This kid is sooo getting spolied by Aunty Kay!
And then of course we got to see Scott and Salome get married.  It was a lovely ceremony and I sincerely wish all the best for this adorable couple.
So yeah, totally worth the sore legs and numb rear ends, but I have a feeling it will be a few days before I get back in the car.
Thus sayeth Kaylia Metcalfe on Saturday, November 27, 2010
Email ThisBlogThis!Share to TwitterShare to FacebookShare to Pinterest
Labels: Adventure, Family, Friends, Fun, Holidays
0 comments

Thanksgiving was lovely… I hope you had something nice to be thankful for.
In my case, I am extremely thankful for my family.
Yeah, I know. Everyone is thankful for their family. Yeah I know, it sounds trite. Yeah I know… But still.
I haven’t always been close to my family. We have had our periods of separation, of distance, of inability to spend more than a few minutes together without hurt feelings.
Not anymore.
At dinner this year we laughed, big genuine laughs the kind you have with your girl friends at 2 am, the kind of laughs that start to hurt your face and almost make you cry, the kind of laughs that a few years ago I would never have thought it possible to share with my family.
I have to wait until someone sends me a photo since the battery in the camera died early in the day, but let me assure you, there were a lot of happy people at my folks’ house on Thursday.
A lot of thankful people.
Thus sayeth Kaylia Metcalfe on Saturday, November 27, 2010
Email ThisBlogThis!Share to TwitterShare to FacebookShare to Pinterest
0 comments

A word on bookstores

As you can imagine, getting used to a new city has had its moments of ups and downs. More ups to be sure…. But there have been a few random downs.

In the up category we have the flatness of the streets/sidewalks. Yes, hills are interesting to look at. Flatness, though, is much better on my knees for the walking. Also, the streets are actually laid out in a semi grid like fashion. This is very helpful as we learn what street goes where etc. Also, so far, there haven’t been those streets with identify crisis… you know the kind… changing their names willy nilly, sometimes 3 times in the span of a mile…. I don’t miss that San Jose! 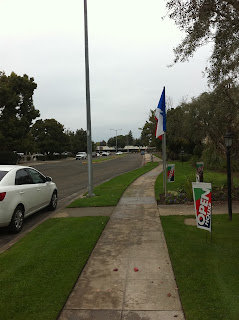 Another good thing; the sheer amount of space we have in this apartment. I mean.. wow. We have areas where there is actual SPACE! No more cramped bookcase after bookcase, things stacked against each other like some sort of hoarders wet dream. Nope! The cat has room to run laps, and it actually takes her a while to do a whole circuit of the apartment.


And with the addition of the new book cases we got in Santa Cruz but never had the time to properly arrange… we have enough room for ALL the BOOKS!!


Some of the bad?

This apartment is really great. Really. But there are, like anywhere, a few quirks. Such as, the toilet paper dispenser in the 2nd bathroom (Olive’s Bathroom) which is located behind and to the left of the sitting female. Not just to the left (annoying on its own) but also behind, freakishly behind, as if someone went to the effort of pulling the toilet forward juuuust a smidge to make getting a piece of the paper that much more difficult. 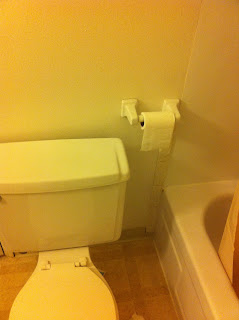 Also, in the master bathroom the shower door basically blocks you from being able to reach the towl rack once opened. Had the door been put on the other way, opening to the left instead of to the right, you could happily stand in the shower and reach the towel rack… but no. Instead you either have to store your towels on the floor for easy reaching or get out of the shower and then close the door and then get a towel. This second option is cold and messy. And could be so easily avoided with just the door being put on the other way.

As for the town, errr city, itself. My main complaint is that there isn’t an independent bookstore. However, the lack of this has led to my brain spinning onto other matters… so I shall save that rant and philosophical question for tomorrow’s blog.

But for now, I am really having fun getting used to this new city.
Thus sayeth Kaylia Metcalfe on Tuesday, November 23, 2010
Email ThisBlogThis!Share to TwitterShare to FacebookShare to Pinterest
Labels: Adventure, Fresno, Locations, Self
2 comments

Fish Out of Water = Horse In A Car

Hello blog! Hello faithful blog readers! (We will get to the title in just a sec......)

Haven’t written in a while, a misstep I am hoping to remedy in the coming weeks. It’s just… well, you know how it is. So much has happened that the “would be” posts get longer and longer and thus more intimidating.

We moved to Fresno! I am writing this at my old desk in my new office. I keep calling it my office. I figure that eventually the Maifan-San will get the hint and it will become MY office.

So far so good.

The move was… well it was a big ass move from one place to another place 3 hours away. So, it was stressful. There were 107 boxes (mostly full of books), 16 containers, 22 black garbage bags filled with clothes and shoes, 15 bookcases of various sizes, a queen sized bed, a futon, a loveseat, a couch, a mammoth coffee table, two tvs, (one a fragile flat, the other a deadweight of early 90s consumerism), my desk, (my!),two dressers, a very large wooden dinning room table (with leaf),….

The furniture arrived relatively unscathed. (Thanks to the brilliant help of our friendly in town loaders.) The cat was an annoying ball of hardly contained nerves, claws, and big scary eyes for the 3 hours it took to get here, but in less than 10 minutes had reverted back to her normal playful happy laid back little self.

The Maifan San and I, on the other hand, have been having our own ups and downs. We left Paradise, often called Santa Cruz, a place that other people flock to, a place of beaches and mountain,s and temperate weather, a place of friends and bookstores and coffee shops, a place of weirdos and eclectic crowds, a place of home…. A place we had both chosen to live in.

Don’t get me wrong. I think Fresno was a good choice for us. I think his new job will be better for both him and our relationship in the long run. I am confident in my ability to get work here and I am going to really enjoy the next month of finishing the book I am writing. We are both happy to be living closer to the Modesto Family. The fun of exploring a new area is both exciting and also good relationship building material. So, on the whole it is a good choice.

But it was still hard.

It is still hard. There have already been moments where I have felt very out of place here.

So, there you have it.

In the meantime... here's a little something to make you laugh. If I feel a bit "fish out of water" because I am a liberal skeptical agnostic pagan living in Fresno.... just imagine what this horse must feel like!