Light Up The Night


I have also volunteered and attended events. 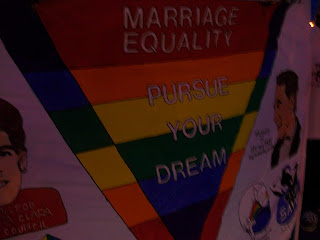 As in… I am a strong supporter of civil rights for everyone regardless of race, color, or sexual orientation.

And sadly, as shown back in November, the people who disagree with me have a small margin of majority.

Last week, on the eve of the CA Supreme Court hearing arguments about the legality of Prop 8, I joined a group of like minded people at the intersection of two of the biggest streets in San Jose. 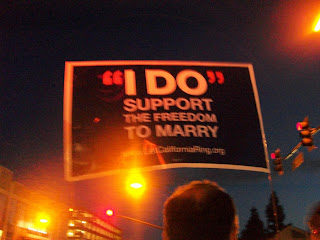 The point of this gathering wasn’t a protest… it wasn’t a noise making onslaught of judgment or a calling to action… it was simply a candlelight vigil to show support for the couples who got married last summer, the couples of the future, and the judges who can bravely and justly do the right thing.

It had been years since I was at a candlelight vigil and on this particular night the wind was pretty fierce. When the whole thing got underway there were only about thirty of us. Most of us had brought regular candles or jar candles and the wind just kept blowing them out. 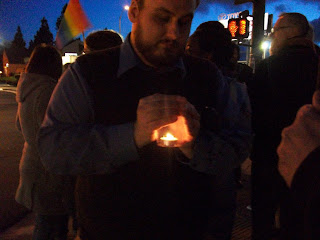 It looked for a bit like our vigil was going to be candle-less and sparse.

Now, as you know I write short stories. What you might not know is that I have a deep passionate love affair with symbolism. I see it everywhere…. Even in places where it isn’t. Part of my brain is always thinking of what everything means or what it would mean if it was happening in a short story and not in my real life. From having a lover hold my hand while drifting off to sleep to having a life changing conversation next to an open window… I can find symbolic meaning in almost anything.

There we stood, spread out on all four corners of the intersection. The sun went down and the cars passed and our candles wouldn’t stay lit.

A man named Mike showed up carrying bags of cheap Dixie cups. Within moments we had all shoved our lightless candles through the bottoms and armed with a buffer from the wind we set about relighting them. 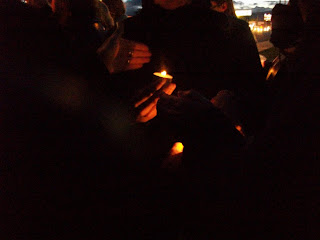 The flame moved from person to person. Soon all four corners were glowing. I looked around and realized that more people had arrived. Some with glass protected candles, others with the small impractical ones like I had brought but thanks to the Dixie cups there was light in everyone’s hand. (See… even Dora The Explorer supports Gay marriage*) 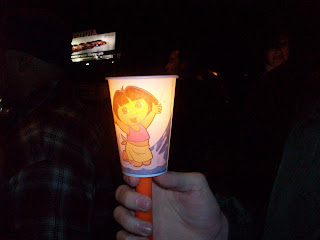 Over and over again the flame moved from one candle to another.

Almost 300 people turned out for this vigil. We lit up that intersection with light, with laughter, with hope. 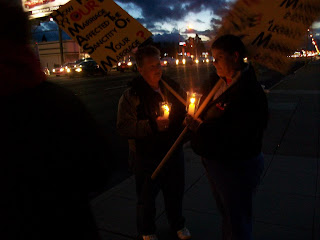 I am beyond honored that I got to be a part of the evening. I was beyond moved as a woman, tears on her cheeks, lit my candle and hummed “This little light of mine….”

It was beyond symbolic. It was beautiful. 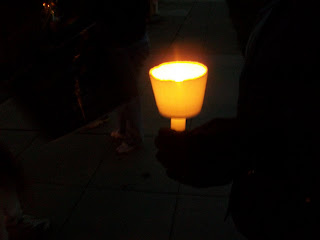 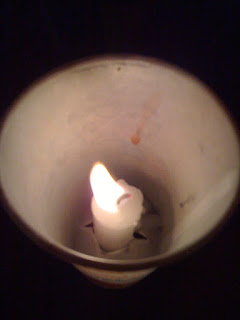 *I have no idea if Dora the Explorer supports Gay Marriage… but I do wonder if that phrase will show up in any future Google searches.
Thus sayeth Kaylia Metcalfe on Sunday, March 15, 2009
Email ThisBlogThis!Share to TwitterShare to FacebookShare to Pinterest
Labels: Adventure, Politics, Self

You've got me all sniffles and teary eyes.

Thank you being there and for the light you hold inside you that guides the type of person that you are.

Kay - great posting and I too loved the symbolism, your writing and of course. . . the picture of Dora.

What an amazing thing to be a part of. I'm sure Dora would support equality in all forms.

And I wouldn't even have yelled "Freebird!" Promise.

I wish I were there too--I might have yelled Freebird.
And I'm pretty sure Dora would have been there and translated it into Spanish. ;)

Hey...so you're actually one of those people I could be watching on like Fox news and CNN...out there in the streets fighting for humanitarian rights! I've never really known anybody like that before! Ok well, so I do know people like that...but here...over there in the US, I don't...just you!!! :)

I want to give you a huge hug right now

thanks for sharing the experience