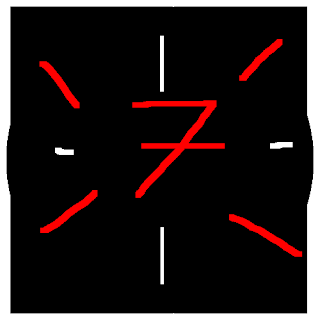 Our first Sin of the Week is Lust

Without further ado, here is ny Lust Post. (and yes, there is a photo at the very end)


Lust: I have gotten in a fair bit of trouble all in the name of lust. There have been some mighty entertaining adventures. Shocker eh? One of my most popular blog posts ever and a story that still makes people laugh was all about lust... and what happens when you are so busy thinking about lust that your common sense flies right out the window and lands upside down in a very odd sort of place.

But since you can read that story anytime, here is a new (sort of) story that would fit into the category of "Kay's Wacky Dating Adventures" (Note: people who might not want to read a story involving me, a dating adventure, and the concept of lust, please stop reading and don't rag on me later.)

I met Oliver (not his real name) one night while listening to a jazz quartet on the patio of a downtown restaurant and sipping white wine. I was there with a handful of girlfriends and he was there with a few of his buddies but left their table and spent considerable time at our table hitting on me... not that I minded at all. Oliver was one of those charming sort of guys who not only knows that they are charming but really lack much else in the way of charms if you know what i mean. All style, little substance.

But I was flattered by the attention and not really interested in much more than being charmed so I was a willing participant in the flirting.

After the quartet finished their set, it was decided to move the party to a local bar a few blocks away. The group of us headed to one of those classic downtown bars that have happily traded cleanliness for “character” but we managed to find ourselves a quiet-ish corner and continue with the lustful flirting and carrying on.

Well, a few hours later we were all feeling slightly charmed and Oliver invited me up to his place for a quick cup of coffee while we waited for a cab to drive me home. This sounded mighty fine to me and I waved goodbye to my friends and gladly walked the three blocks to a very quaint little one bedroom located in one of those nondescript complexes over off of San Carlos.

While waiting for the cab and totally ignoring the coffee pot we were in the midst of charming each other when the night came to a sudden and dramatic end.

She was none too pleased to find her boyfriend making out with a topless girl on the living room couch.

Who could blame her? I grabbed my top and my purse and off I went.... only to discover in the cab ten minutes later that I hadn't actually left with my shirt... but with her's. So, not only had I been smooching some poor girl's boyfriend, but I had inadvertently stolen one of her tee shirts as well.

Mortified I wanted to do something, but honestly couldn't think of what to do... so I went home, washed the shirt, and added the encounter to my repertoire of “gee dating sucks” stories.

A few months later I was at the park in downtown when I was approached by a familiar looking girl. After some stilted small talk she informed me that her name was Adrianna and that I was wearing her shirt.

Thankfully she wasn't upset with me for either the kissing (she agreed that he was a looser and informed me that she had dumped his sorry rear end) or the theft of the shirt. In fact, we actually had a fair bit in common and ended up staying in touch for a few months.

Since I kind of liked the shirt (both for its comfort and also for its story) she let me keep it. And since I know you all are just on pins and needles wanting to see it…don’t worry, I promised you a photo and I will deliver.

So, there you have it. Sometimes lust can lead you into awkward situations… but now at least when asked if I was ever the “other woman’ I can say (mostly guilt free):

Why Yes, Yes I've been there, I've done that, and I even got the tee shirt! 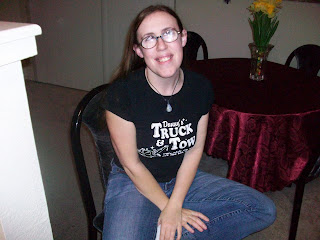 Now it’s your turn! Wow us with your Lust inspired Sin of the Week post!


Want to join in the fun? Read the! How This Sin Meme Works!
Thus sayeth Kaylia Metcalfe on Friday, February 27, 2009
Email ThisBlogThis!Share to TwitterShare to FacebookShare to Pinterest
Labels: The Seven

Does not refraining from making some kind of remark about having the tuck up on the rack count as lust?

Geez. Figures you'd open with this one. Oh well, if I'm gonna get smacked anyway, I might as well get it over with.

Gonna be a tough one I think.

Correction. that should have been "truck" up on the rack.

I hate it when my typlexia flares up. Just hate it.

Okay, I have added my entry. And it's all beacause of you, sugar-bumpkins (that is, Kay is the sugar-bimpkins, not Mojo)

Hey Mojo, if you feel lust for your truck.. well... umm... I think they make pills for that,

Maifan-San: Thanks for writing! I loved your blog... Not too wild about my new nickname, but I guess if I get to call you the Japanese equivalent of “Muffin Man”, I have to give you some leeway.

Funny story. Glad you got to keep the shirt and that she dumped the jerk. I posted something too.

His girlfriend came home? What an ass!

Kay, I posted something less personal and I hope maybe a bit funny! I really think I'm going to like this! :)

BTW Your answer to my ethical dilemma post was right on!

That's pretty hilarious. Thank God she didn't call the cops to come get her shirt from you. haha

Okay, I'll see if I can come up with something for "Lust." That "keep it PG-13 thing is gonna put a crimp in my style though. LOL .. I'm kidding.

Funny story. I love this idea...came across it through Mary. I have posted mine. Come have a look see.

Okay I finally got mine posted. It only took me like 16 hours since I came over and got the word for the week. ;-)

Which is a real relief. Because "Envy" could land me in the same situation.

Oh... and I took it upon myself to create a button for this... just 'cause I can. Anybody else wants to use it, feel free.

Oh. and it wasn't my truck I was lusting for. I mean it's a nice truck and I love it but... damn.

You could start a line of tees ya know. There would be a wonderful story behind the start of the company and heaven knows most of us can identify.

I hope it's OK to post something during the week. I just can't get the story out right now - too much rolling around in the noodle.

All's fair in love, war and tee shirts I suppose.

BTW- I still can't figure out why your link isn't updating at my place. Arrrgh!

You have until this Friday to get in any “Lust” sin pieces… on Friday I will give you the next Sin and then you will have all of next week to some up with something.

Finally! Posted my response. It's so personal, I cried several times while writing the post.

Response posted. I'm pretty sure a visit from JanieBelle falls under the lust category, anyway...

I'll try my hand at this...ummm...with a song. Not me singing, gratefully....but a song from youtube that epitomizes lust.